Microsoft, long the King of the Hill, is steadily losing market share. 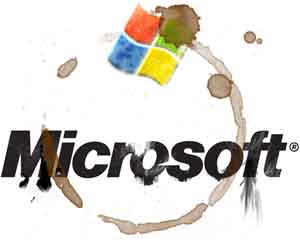 The problem with being King of the Hill is that somebody is always trying to take you down. Slashdot reports that Internet Explorer (IE) market share has dropped below 70% for the first time in eight years. IE represents the single greatest marketing tool in the Microsoft arsenal. They are seriously concerned, but what can they do?

In an industry as vast and diverse as personal computing has become, how does a company retain such a lopsided advantage? As humans collectively gain a greater technological understanding, we are discovering that there are options out there that perform better, are more customizable and totally FREE!

Also, when a company reaches the unfathomable enormity of Microsoft, things are bound to fall through the cracks, which doesn’t help. Consider the recent Zune debacle. On Dec. 31st, 2008, the Original Zune froze. The Seattle Times reported that starting at 12:01 AM reports of frozen Zunes started flooding the blogs and user forums, affecting possibly over a million people. A bug in the internal clock was thought to be the culprit, Zune didn’t know what to do with the 366th day. They reportedly fired back up on Jan. 1st, 2009.

The internet began as a way for scientists, engineers and scholars to freely share information. These intellectual superiors did not consider the newly found form of hyper communication as a revenue source, and thankfully that hippie-like flag has been carried through the current revolution and there are thousands of FREE applications available just for the asking.

LAMP is a perfect example of how all you need is a computer and the virtual world is yours. LAMP is an acronym that stands for:

An Open Source Operating System (OS), developed by Linus Torvalds offers a multitude of distributions, or versions if you prefer, including Ubuntu which represents a direct challenge to the Microsoft empire. Ubuntu, founded by Mark Shuttleworth, designed for ease of use has been gaining acceptance worldwide as a desktop application. Linux is already the Server OS of choice worldwide.

Apache is the most popular web server software on the internet and was founded by Brian Behlendorf.

MySQL, authored by Michael Widenius, is a relational database management system which has more than 11 million installations. The program runs as a server providing multi-user access to a number of databases.

PHP is a scripting language originally designed for producing dynamic web pages. It was created by Rasmus Lerdorf, and the acronym originally stood for Personal Home Page.

While Microsoft continues to force computer hardware upgrades with each new release, Ubuntu, on the other hand, works perfectly well on your old machines. Ubuntu also includes a bundle of FREE software programs with each installation that competes with MS Office, Adobe and other popular and relevant software programs.

If you have an old machine in the garage that still works, but can’t keep up with the new MS releases, try downloading and installing Ubuntu just for fun. As the world continues to embrace the true spirit of the information age by accepting open source more and more, the closing line of this post is directed at the King of the Hill:

“The End is Nigh”